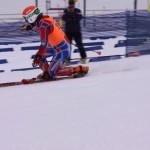 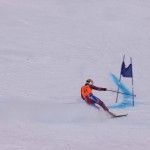 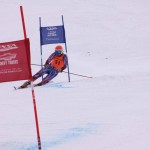 Sunday was the close of the 2013 US Telemark Nationals.   We had the Sprint Classic Duel Parellel.  A mouthful I know.   If you were to ask my Mom what event it is called she would say Gladiators on skis.  She has a good point because it is pretty intense and can get gladiatorish seeing that you are skiing head to head against your competitor.  Who would of thought that skiing would be a contact sport?  Let me explain….You have two skiers up a the top of the hill with two different exact courses.  A red course and a blue  course.  You are prompted to race at the exact time and off the two competitors race, each down their own course head to head.   You both go off  a jump midway through the course which is sketchy in itself then back into your course.   Once the course ends both competitors (this is where it can get wild) have to merge into this toilet bowl shaped thing made out of snow called the Wrap.   The problem occurs when two skiers merge at the exact time at the bottom of the course….who is going to give way to the other?  It is a race and of course you want to beat your competitor to the wrap….collision!!  On skis!!  Going pretty freaking fast!  Hence the reason my moma calls it Gladiators on skis.  I kind of agree because there is a lot of potential for some crazy things to happen.   Once you get out of the Wrap you then go into a head to head skate with your competitor to the finish.   The best way to understand all this is to just watch a video of it.

This is a brand new event that was just implanted to enhance our chances of becoming an Olympic sport.  When we (our sport in general) went to the Olympic committee last year to propose Telemark racing to be in the Olympics they came back to us saying that we needed to make our sport more exciting.    So we came up with the Parellel!   And yes it is very exciting to watch as a spectator!  Us athletes, well it is what it is!  If this is what it takes to be an Olympic sport then let’s do it.

Seeing that it is still a fairly new event to us Americans our board decided to not make this event this year count towards our National Rankings.  Good thing because I did not fair to well the last day.  It was a lot of fun but I had a mishap the first run and ended up falling.   Basically anytime you take a crash in ski racing it is pretty hard to finish the day on the top of the leader board.

To wrap up this year’s Nationals it was a great week.   I skied the best of my life to three 2nd place finishes out of 4 races.  I ended up 2nd overall in the National Rankings which was far beyond my expectations.  I am so blessed by the Lord to have skied that well.  Only with Him was that all accomplished.